How a hat should fit (with Stephen Temkin fedora) 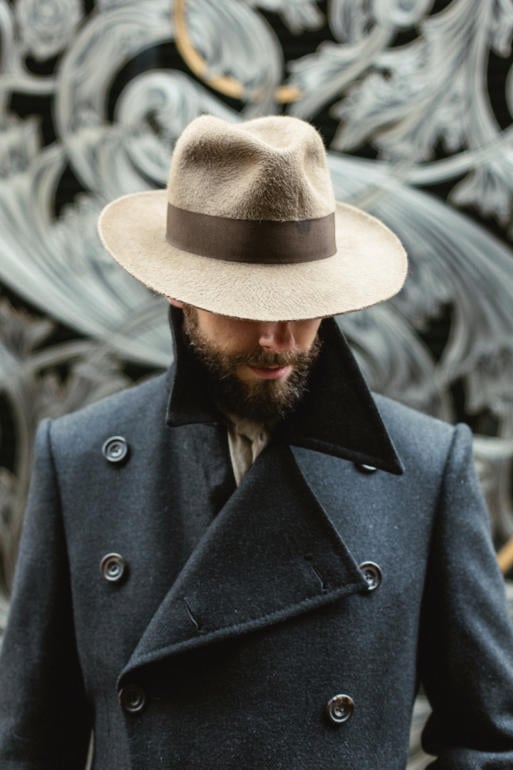 Every man thinks hats don't suit him. Yet every man, of every shape and size, used to wear a hat - and they looked good. Conclusion: men don't know how to pick a hat.

I know I've run through that before, but it bears repeating in the name of re-popularising the hat.

Hats are hard to wear today, given no one else does so. But they certainly aren't anachronistic, and they are very practical: warm, excellent rain protection, and not as awkward as an umbrella. 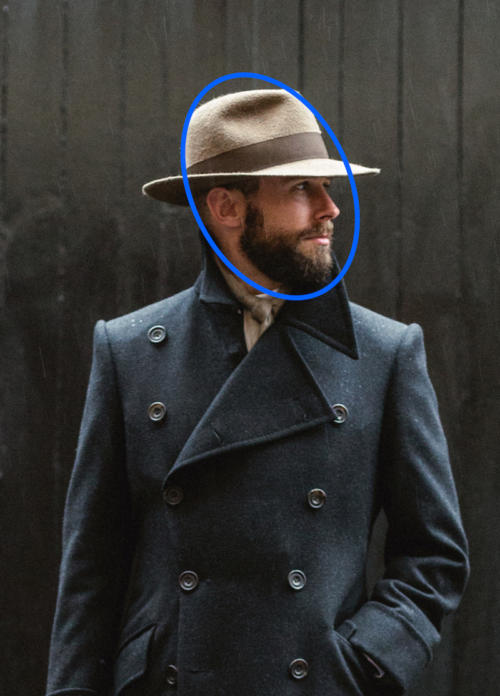 So how should you pick a hat? Well, first of all ignore the brim and focus on the crown (the top).

Broadly, this should echo the shape of the rest of your head. If you drew an oval around the bottom of your chin, past your ears and over the top of the hat (as I have done above), the crown should sit cleanly in that oval, reflecting the shape of your lower face.

So if your face is long, you need a taller crown. If it's thin, that crown should taper (so it's thinner at the top).

In the picture above, you can see the height is pretty good for my relatively long, thin face.

The front view (below) is also pretty good, although arguably the crown could be tapered a tad more. 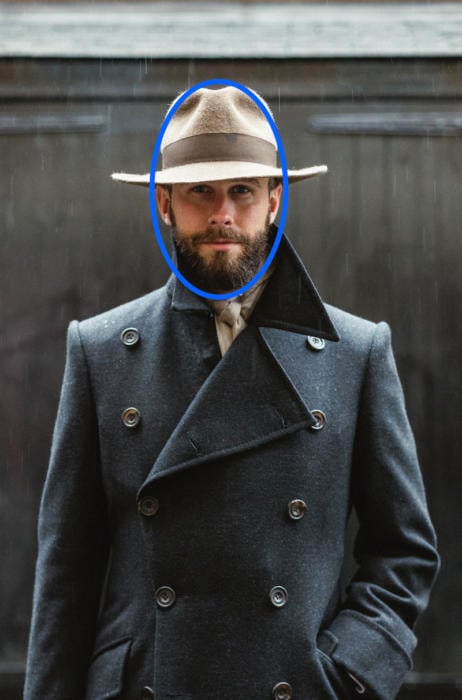 Most hat shops don't offer a big variety of crown heights and shapes. Given they also need to vary the colour, materials and brim width, it may not be practical to have many.

So rather like finding a good shoe last, you may have to try different brands to find a crown that suits you.

Once you've got a sense of the crown shape, consider the width of the brim.

This is far more subjective, and driven by style and formality as well as bodily proportions.

So I wear both trilbies and fedoras, for instance, with the trilby pretty much always having a smaller brim. The trilby is also generally seen as a more casual hat, partly because of that smaller brim.

However, the proportions of your body and the clothes you're wearing (below) should also be borne in mind. 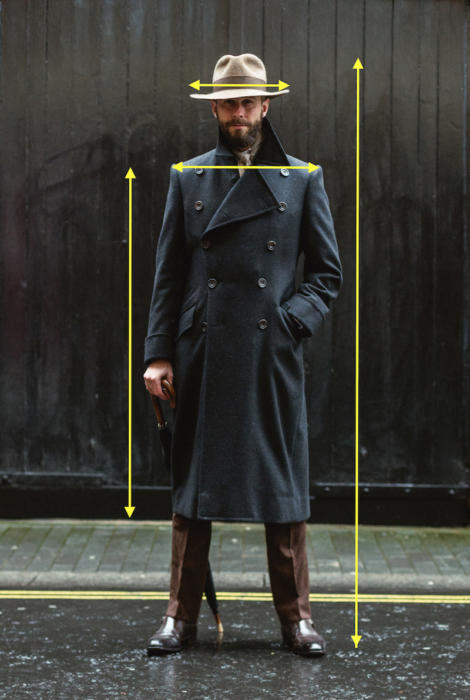 I consider that I can wear a slightly larger brim because of my height. A smaller man might look slightly top heavy and disproportionate in a big fedora.

I also tend to wear a hat like the one pictured (from Stephen Temkin, aka Leon Drexler) with longer, more structured clothing.

It looks fine with my big-shouldered Sexton coat - indeed, I could probably wear an even larger brim (perhaps 8cm, the Temkin being 7cm). I have a charcoal hat from Anderson & Sheppard at that width that works well.

But that A&S charcoal definitely looks too big with a raincoat, for instance, or a raglan-sleeved coat. 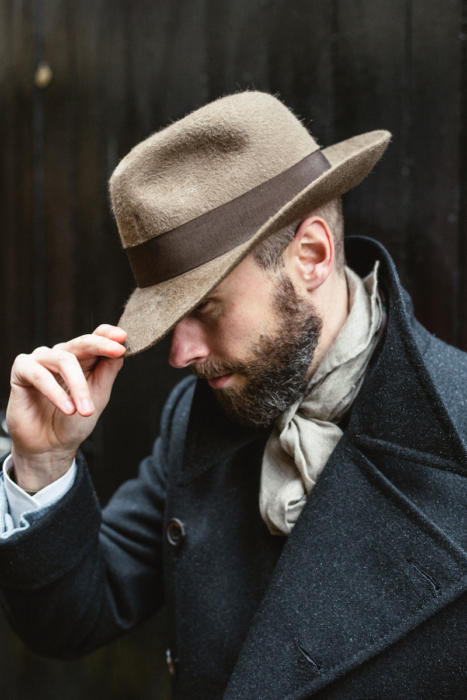 I should say again that these latter points on brim width are much more subjective. Benedikt at Shibumi is much smaller than me and wears big brims with aplomb.

They also apply less when the hat is worn on the back of the head (more casual, and not something I like on myself). Agyesh at Stoffa and Jamie do this well.

But the factors you need to consider - bodily proportions, formality and (with the crown) shape of your face - are not in doubt.

If you want to find out if you really are a man that can't wear hats, these are things to look at in the mirror. 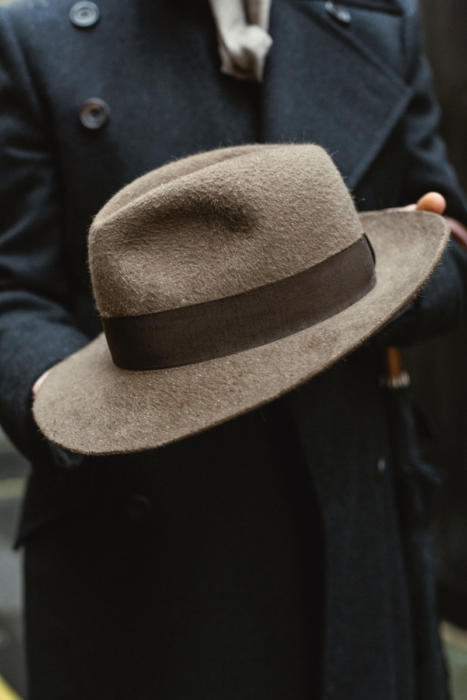 A few details on the hat - for I've never done a full review, following my initial post back in 2016.

It was made bespoke by Stephen, who works out of his home in Toronto, Canada. The company name is Leon Drexler (a composite of his father's first name and mother's maiden name).

It is made in beaver felt with an angora finish (the slightly longer nap on the surface). This gives a slightly more casual effect, and requires occasional brushing to keep the hairs separated and stop them matting.

More details on the making process in that original post. 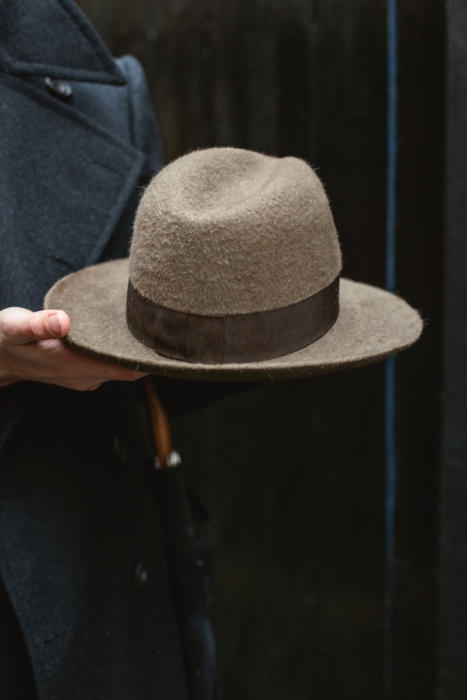 I have what's known as a 'long oval' head, and with ready-made hats usually have to size up and then use foam pieces inside the sweatband to fill out the sides.

Stephen managed to partially correct this in his hat, but it's not easy - hatmaking requires a solid wooden block for every size and style, so bits must be added to the block to adapt it. Stephen does it using (very Canadian, this) hockey tape.

I couldn't be more pleased with my hat, with the fit, the material and the style.

The colour is more muted and urban than most greens, and I like the little design touches such as the flat, square bow at the back of the head (shown above) rather than something more decorative at the side.

Some details on Stephen's service:

I am also wearing:

You can follow the discussion on How a hat should fit (with Stephen Temkin fedora) by entering your email address in the box below. You will then receive an email every time a new comment is added. These will also contain a link to a page where you can stop the alerts, and remove all of your related data from the site.