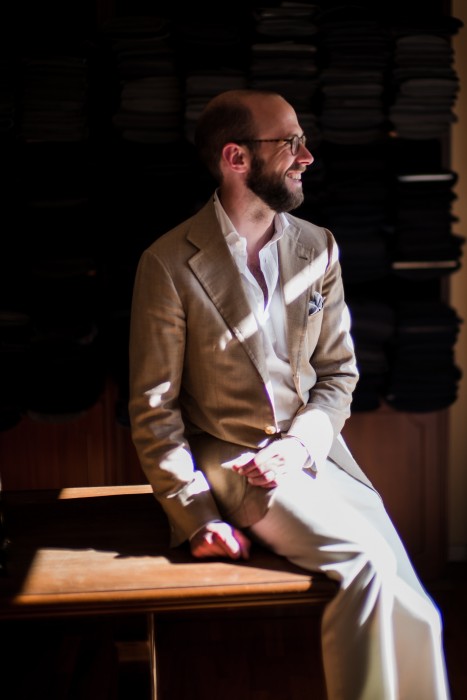 Summer outfits often involve white somewhere, as it’s nice to reflect the brightness of the weather – particularly if you’re in Italy and the sun is that much more consistent than it is in the UK.

Combining more than one white – or cream – tone can be difficult, and is best achieved by separating them, if only partly. Here a white shirt and cream trousers are separated by the tan jacket, and even though the two will abut each other when the jacket is open, the separation is sufficient. Just don’t take the jacket off.

The Simonnot-Goddard handkerchief from Trunk, a current favourite, is dove grey with white edging, which saves having one more white in the ensemble. And the shoes are a rather different type of tan (it covers too much, that word). 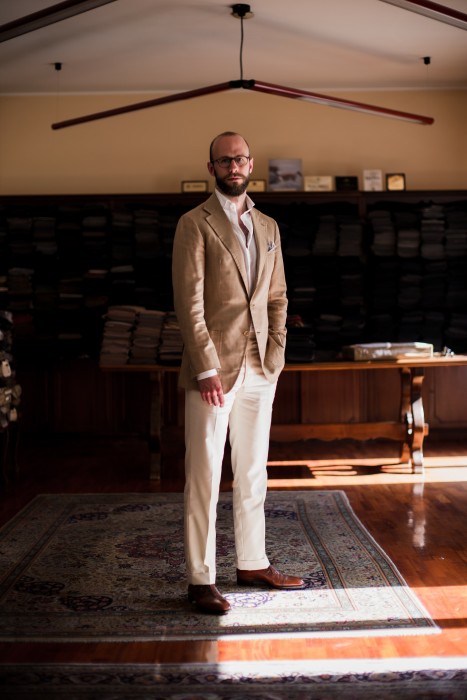 The shirt is of a type I have made a few of recently – lightweight, end-on-end cotton but with a polo-shirt front, cut off halfway down. It  works well as a summer shirt and a bridge between the formal and casual. From Satriano Cinque.

The trousers, in a cream wool-gabardine, come out rarely, but were beautifully cut by John Malone at Anderson & Sheppard. Wool gabardine is great for more formal trousers like this, but doesn’t have the versatility often attributed to it. For anything even approaching more casual trousers, avoid gabardine (both wool and cotton).

Shoes by Stefano Bemer (more on those soon).

Simon
This outfit is beautifully co-ordinated. Those trousers are simply stunning. Any more detail on the jacket? I like the colour.
My only criticism would be that the jacket sleeve looks too wide in its length, creating a baggy look at the elbow (see first picture) and where it terminates, there seems to be too greater of a gap between shirt and jacket sleeve. Oh, and the shirt collar – perfect in its execution.
Any chance of close up’s in future – just now and again perhaps so that we can understand the colour and texture?
Regards
Bradley

Hey Bradley,
The jacket is from Caliendo and has been featured on the site before – have a search. It’s a wool/silk/linen mix in a mini-herringbone. The sleeve is wider at the end because it is sometimes worn with double cuffs.
Simon

Looking through the archives again…but how is your navy cashmere Vergallo holding up? Do you still regard Vergallo as the best value Italian visiting London? Finally, have you tried Panico in Naples?

Hey,
Good, and yes I’d say Vergallo or Solito would be the best value-wise visiting London. Solito has that more distinctive Neapolitan style, but Vergallo are very versatile and as you can see I’ve done a few different things with them.
Have seen and met Panico, but no never tried him. Lovely finishing.
Simon

Your outfit/look, well, looks also great. I would however wear a more contrasting colour for the jacket (navy?), but that’s just my taste, of course.

The jacket has beautiful lapels and the button is perfect. You look happy – I think you enjoy the warm and sunny weather.

Thanks for this Simon.

Additionally, do you think the overall aesthetic of a Neapolitan 6×1 DB suit, with a DB shawl-collared waistcoat, is a workable mixture of English/Italian, or just a strange combination?

Sounds rather strange to me. I assume you wouldn’t wear the w’coat and jacket together?

Unless you have one already, I’d get a normal Neapolitan DB (6×2) first, and see how you like the style. With the waistcoat if you think you’d wear it

Whilst I get the colour theme, isn’t wool/gaberdine a bit heavy as a summer cloth? I would go for the outfit if the trousers were in a heavy linen, as I think cream and tan make a great contrast. I actually think tobacco for the coat would be even better.

Lightweight wool gabardine isn’t too hot in my opinion, but of course it depends on the temperature (it was only around 26 celsius in Milan I think). And yes, tobacco would have been a good colour too. Though, similar to the previous comment about navy, if the contrast between jacket and the rest were too great, it might have made the other too appear too similar to each other.

Simon. I have to disagree. Gaberdine looks and feels great. I feel you can dress it up or down. Sorry. This time your wrong!!
Best
B.

Wonderful summer look Simon. I wonder if you have any other thoughts on wool fabrics that work well in white? With white chinos I find myself missing the drape of wool but can’t recall seeing white wool fabrics at any of the tailors I use.

It’ll be cream, but gabardine and flannel are your best options. And linen if you need something a lot lighter

http://www.reiss.com/eu/mens/reiss-sale/suits-and-tailoring/youngs/navy/
Simon
Would you say a suit such as this is a decent price, and acceptable attire? Obviously far lower end than what you deal with but in terms of lapel size, arm width, trousers etc?
G

I’m afraid it’s very hard to say. I’d need to see it in the flesh to get an idea of quality, and then whether it’s a decent price or not is a much more open question.
I can break down the design points, but that would be a much longer post. Not sure it’s worth doing for a single suit? Do other posts around suits give a decent idea of what’s good and bad in design, or not?

Thanks for talking me through this Neapolitan/English mash-up! In my head I picture Alexander Kraft in his Cifonelli garb, and I feel that the DB waistcoat is very smart.

What element throws off this ensemble? Is it the informality of the 6×1 DB (hence your suggestion for a 6×2)? Or does Neapolitan construction and waistcoasts make for a poor match?

It’s more the adventurousness of it all. Each piece will be unusual and it seems unlikely you will wear them together – possibly even one of them at all. Refer to point one of the ‘five tips on bespoke’. It’s the truest if the lot…

Would you not think a light blue shirt would be more versatile? Whilst white works with the jacket, a pale/lighter blue shirt would be a lot more dynamic for me. I try not to wear white shirts unless linen or formal occasions, blue in most situation is always the better choice. IMO

I wear blue far more often too, but this was a demonstration of how to wear white in this combination – and I did find white worked as well here

Hi Simon:
Will your trousers show a bit of your socks when you walk?
I have got one trousers done by Graham Browne, it has the similar length as the one in the pic, it just sits right on the top of my shoes, but it will show my socks when i walk.
Do you think it is normal?

Hey Andy,
If you don’t show any sock when you walk you should worry.
Trouser length is always a balancing act but a good starting point is to not have any break in the back of the trouser, and single clean one in the front. Try that and then work upwards, to find what you like. The balance is folds when standing vs flapping when walking.
There are various ways to make this easier, including slanting the trouser hem forwards, but of course you can’t do that on a turn-up like this one.

Thanks, Simon.
In that case, I think Dan did an excellent job on my trousers. When i stand still, it doesn’t show any socks and i single break in the front.
It will definitely show my socks colour when i walk.

Lovely combination Simon. Was wondering if the white shirt is the same as a style I’ve sometimes heard described as a “popover” (presumably from the way you put it on)? What style sleeves does it have? Turnback, like a long-sleeve polo or cuffs, like a shirt?

I have been considering having an outfit like this for myself. One sticking point is how the trousers should be held up.

I think a belt (matching the shoes, say) would interrupt the flow of light colour. An alternative would be to wear braces however I think they are a little to costume-y, for me. How are your trousers supported here? I can’t quite see from the photographs.

Thank you for your blog which I have found both informative and well-written.

Thanks Graham. Do spread the word.

Lovely combo, Simon. Can these colors (particularly the trousers) work in the evening in the summer, or only in daytime? I’m thinking of taking similar cream trousers to Italy on holiday, and wondering if they are fair game for evenings/dinners with or without a darker jacket on top.

I think cream trousers like this are fine in the evening, yes, particularly with a dark jacket on top.
It would be hard to do it in England, but in somewhere where it’s been full sun all day, I think it looks fine.