Skip to content
This is the fourth article in our Guide to Suit Style.
You can see the full contents so far, and browse between them, on the right-hand side of this post.

How many buttons should I have on a single-breasted jacket?

Just as hard as deciding the type of suit you’re looking for (either ready to wear, made to measure or bespoke – following on from our first post), and the material, is what style you want.

This comprises several key decisions, many of them not obvious to someone buying suits – particularly made-to-measure or bespoke suits – for the first time.

Most men have a pretty good idea what a suit looks like. Their mental image will be of a single-breasted jacket, with two or three buttons and notch lapels, and trousers that sit on the hips, probably without pleats or turn-ups.

But while this may seem ‘standard’, those men will probably not be able to describe the suit in these terms. So when presented with the question ‘what style of suit would you like?’ by a tailor or salesman, they will struggle.

In this and the next few posts we will set out those style decisions, so the reader can understand all the various choices – and most importantly, what affect they have on the look of the suit.

We start with the number of buttons on a single-breasted jacket. This is important, more complicated than it sounds, and drives a lot of other decisions.

Tips for Steve’s first visit to the tailor

Fashions exist even within classic menswear, and over the decades men have chosen one, two, three and even four-button suits. But generally the most common style has either been a two- or three-button.

At the start of the 21st century, three buttons were more fashionable than they had been in a long time. But it’s important to differentiate true three- buttons and three-buttons that ‘roll’.

A true three- button jacket will have lapels that end, abruptly, just above the top of those buttons (see image above). When only the waist button (the middle one of the three) is fastened, this short lapel will create a sharp, awkward angle at the top of the jacket’s front. It has been designed to button the top two, and looks odd if they are both unfastened.

Most other jackets have some amount of ‘roll’ to them, so that when the top button is unfastened, the lapel rolls back and lengthens, ending somewhere above the waist button. This roll or lack of it is driven by factors such as the canvassing of the chest and the tension of the collar.

High fastenings (which three- or four-buttons naturally demand) look good on fewer people, as they shorten the plunge of the lapel and reduce that uniquely elongating, strengthening effect of a tailored jacket.

Nevertheless the style has been popular in the past when driven by specific fashions, such as the Mods. And they usually inherited parts of their look from earlier gentleman’s attire, where as little shirting was on display as possible – leading to the necessity of a high-fastening jacket or an ever-present waistcoat.

Often associated with but not exclusive to Italian bespoke tailoring, the ‘three-roll-two’ jacket is not designed to fasten its top button. As shown above, the jacket is only fastened at the middle button so the lapels roll naturally outward.

This is a nice, slightly more relaxed alternative to the button options that follow, and certainly more laid back than the ‘true’ three-button jacket.

The advantage of a single button

As we have seen, a higher fastening is less flattering and (certainly in my view) less stylish, while fewer buttons both lengthens and slims the wearer.

You could be forgiven for thinking that the choice of one button or two takes this argument a step further, with a one-button style lengthening the torso even more. But in fact the lapel length will likely be the same.

With both styles, the waist button is the top (or only) fastening – the two-button style merely adds another, lower button.

What’s more, most two-button jackets are designed for the bottom button not to be done up. You may be able to fasten it, unlike the bottom buttons of some waistcoats, but the cut is far more elegant without.

(Some styles have two buttons that sit above and below the waist, and are designed to both be fastened. But these are rare, often fashion ephemera, and blunter than a traditional shape. After all, why turn that single-point fulcrum into a static bar?)

An argument for a second button

So, you may well ask, what is the point of a second button? It seems redundant. Many commentators have shared this view, arguing that one button looks more stylish and three more practical, while a two- button jacket is just dull.

There are three principal reasons for adding the second button.

The first is practical – a little wind can turn your jacket fronts inside out, flapping them around and forcing you to repress them with your hands. Although you wouldn’t normally button the lower button, you do have the choice when needed.

The second is a matter of style: one button is sharp, singular, not to say rakish.

Notwithstanding the jacket’s heritage – coming from the morning coat and riding wear – nor its superb modern manifestation (thanks to Huntsman and latterly Richard Anderson), this is a style. And some men don’t want a style – they want normal, they want unobtrusive, they want stolid. They do not want anything that could suggest a rake. For them, the two-button jacket is the most flattering and practical.

Back when all men wore braces, their trousers all started around their belly button, so the waist of the trousers and of the jacket were both at the same point.

This meant that when they put their hands in their pockets, pulling apart the jacket, no shirting was on display. While this isn’t necessarily recommended for every modern man, a triangle of puffy shirt is hardly flattering and diminishes the upward-sweeping line of the lapels.

So as a one-button jacket means more of a cutaway front, there is more potential for displaying your waist and shirt in this way. Trousers on the natural waist are not required, but the argument for them strengthens. And few men wear trousers of that height today.

One versus two-button is a matter of personality, but consider the arguments on both sides.

How high should my trousers be? – Reader Question

How to pick buttons for a suit – Reader Question 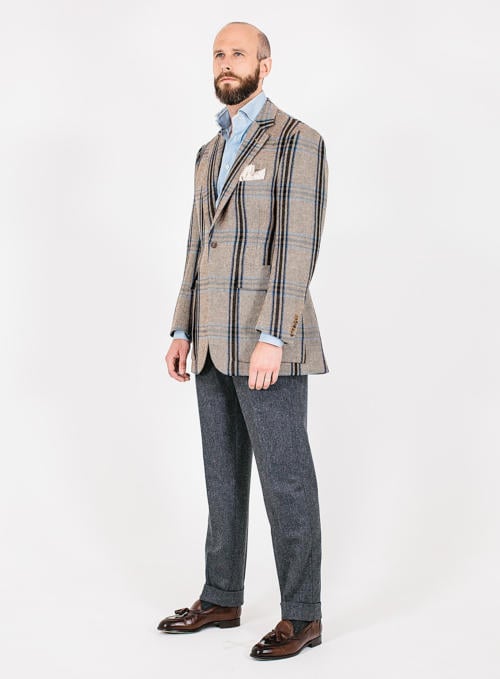 You can follow the discussion on Suit style 2: The single breasted by entering your email address in the box below. You will then receive an email every time a new comment is added. These will also contain a link to a page where you can stop the alerts, and remove all of your related data from the site.

Last reply was 4 months ago
The Guide to Suit Style