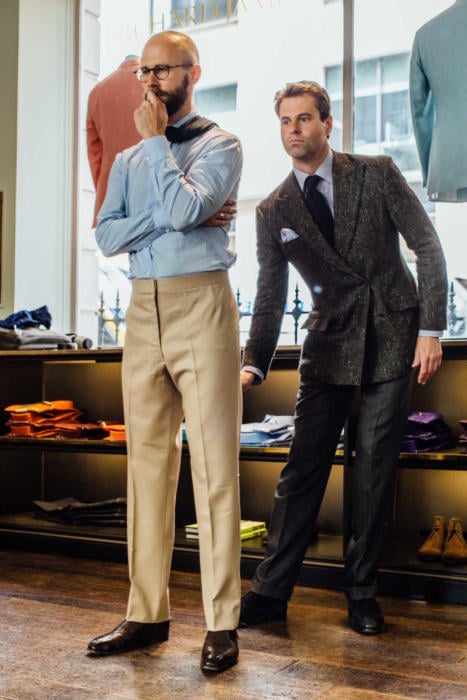 Richard James are an interesting name in bespoke tailoring. Better known for ready-to-wear suits and various accessories, they’ve actually had a bespoke operation since they set up – in a small shop at 31 Savile Row – over 20 years ago.

The bias in that list towards the world of entertainment is in part down to Richard and his connections, but also to the kind of brand ‘Richard James’ has been perceived as: playful, colourful, a touch glamorous.

A critic might say this is glamour of a certain era – the mid- to late-1990s specifically. But it is interesting (instructive even, for any of the start-ups we cover) how a brand with such a clear identity has maintained a following over the years. 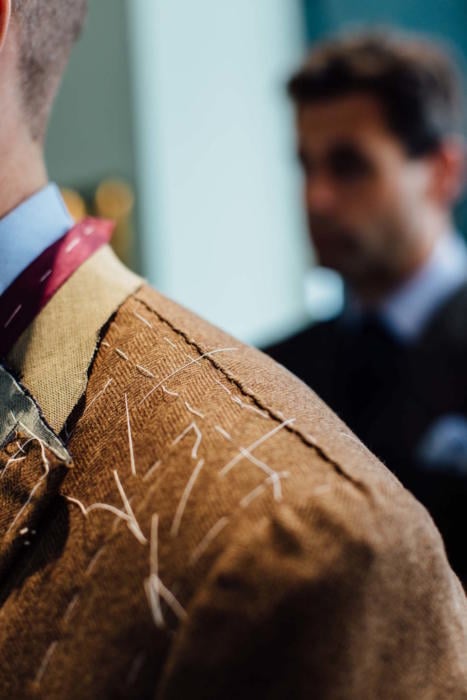 Inevitably, this RTW identity influences bespoke and vice versa. Sean and the team talk about the early days of using bespoke clients as inspiration for new RTW lines. They had a reputation for experimentation, and old bespoke hands would come to them with rather fresh ideas.

Today, that influence is mostly seen in cloths and in the very holistic, consultative approach the sales team take in bespoke (there has been a separate bespoke store on Clifford Street since 2007).

This is somewhere where the front-of-house really sit down and talk a customer through his needs and his wardrobe. It’s something a lot of the other, older houses say they do too, but in reality their ideas are pretty fixed. 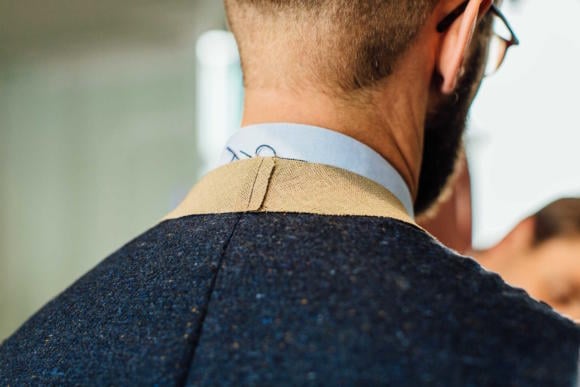 I first got to know the bespoke team through Ben Clarke (pictured here with me, during a recent fitting).

An incredibly hard worker, Ben has apprenticed both as a coatmaker and a cutter, and is now the only full-time cutter at Richard James.

(There are two other part-time cutters, who largely look after specific clients, a couple of assistants, and the front of house. Most making work is done outside.)

Ben is also very creative and open to new ideas, so with our commission here we tried a few different things – all created in a trial cloth before we switched to the real thing. 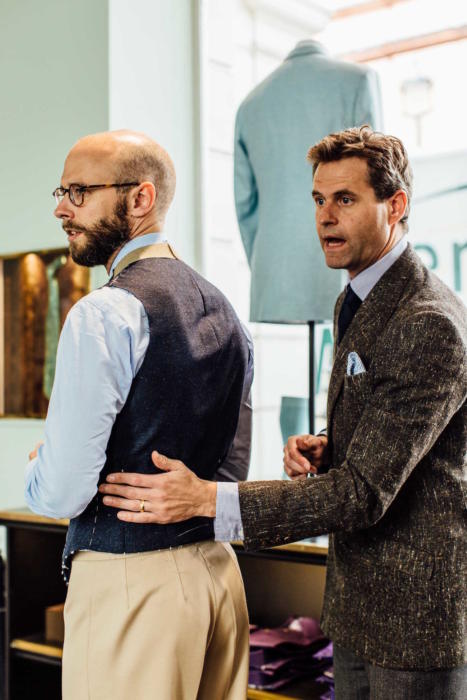 We are making a pair of trousers in cavalry twill (love a bit of cav). A waistcoat in Harris tweed. And a brown cashmere jacket.

The waistcoat will be made in a similar way to those I have had previously from Chittleborough & Morgan and Calvo de Mora: back and front in the same material; square and low to sit above (relatively high waisted) jeans and chinos; and with a proper jacket collar.

The fitting here (in a trial cloth) was rather too much like a traditional waistcoat for braced trousers, short in the back and rising quickly from the points. That was perhaps down to miscommunication and will be changed for the next fitting. 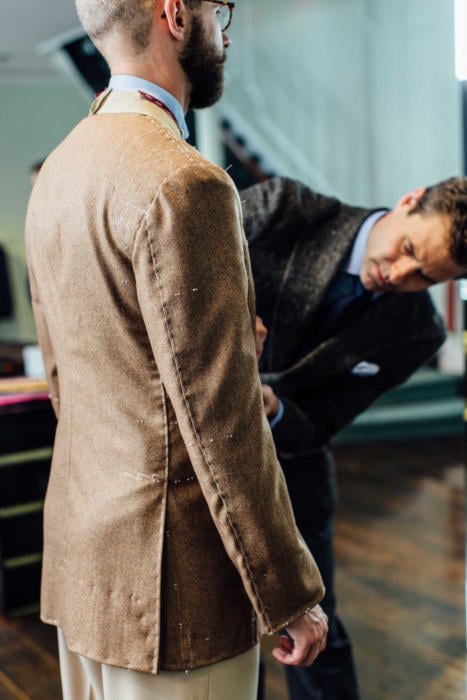 The jacket will be much softer and less structured than most Richard James tailoring.

The brand has historically been known for long, slim jackets, with relatively narrow lapels and deep vents. This one has a very slim shoulder pad, broader lapels, and rather more open fronts.

As ever with such experiments, there is a little risk here. But Ben’s open-mindedness and ability to make every part of the garment will be a big help. 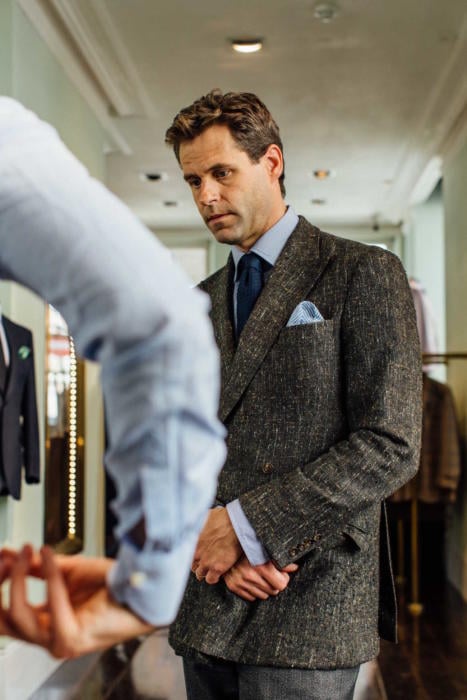 You can follow the discussion on Richard James bespoke tailoring by entering your email address in the box below. You will then receive an email every time a new comment is added. These will also contain a link to a page where you can stop the alerts, and remove all of your related data from the site.

I'd be fine with that, personally. It would be ideal if the suit were a slightly more casual cut, but I still think just about ok, given the cloth

Well, it's rather better than a tracksuit. Jersey is not the best material for tailoring, but then you're consciously sacrificing that by going for something more casual. This is an unlined jacket, and most of the sharp lines of tailoring are no longer possible anyway.…

Thanks Nick. I'm not sure my old rope-soled ones had rubber in there either, but I guess it's hard to tell. Obviously rubber vs rope sole is a choice governed mostly by other things (for me anyway)

Grey is nice with colour, so perhaps try something like our Madras linen check? Or an oxford in another colour like a pink or yellow. (Pink PS one coming soon)