This is the corduroy suit I featured the fitting of last October - at the E. Marinella store in London.

Although labelled as Marinella, it was made by Nunzio Pirozzi - a Neapolitan tailor with a wonderful moustache and a sterling reputation in Naples.

I've yet to find someone that doesn't have a kind word to say about him.

Like many tailors around the world, the trousers were also made by someone else, under Nunzio's direction - in this case, our friend Marco Cerrato. 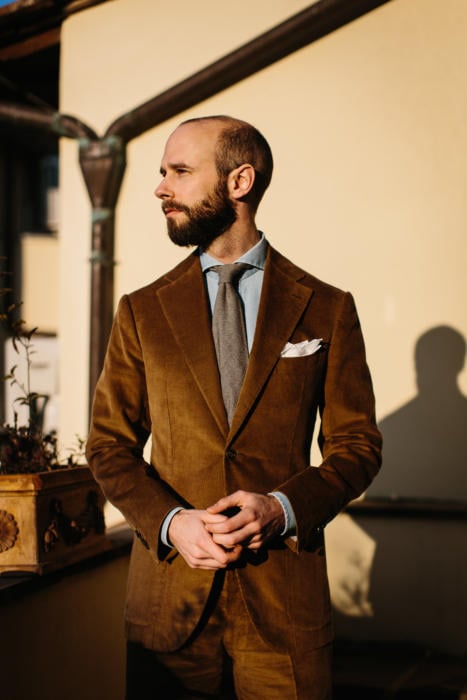 There were several issues with the suit, although the overall work and finishing was very good (again, something Pirozzi has a reputation for).

The first issue was that the jacket was rather too tight - particularly for corduroy, which of course being cotton has no natural stretch.

In fact, the images here are a good illustration of how hard it is to assess the fit of a jacket from photography.

Although the line through the waist looks clean and flattering, it is actually too close to the body to remain comfortable for long when buttoned.

Although I wore the suit to Pitti this past January, I ended up doing so with the jacket open most of the time. 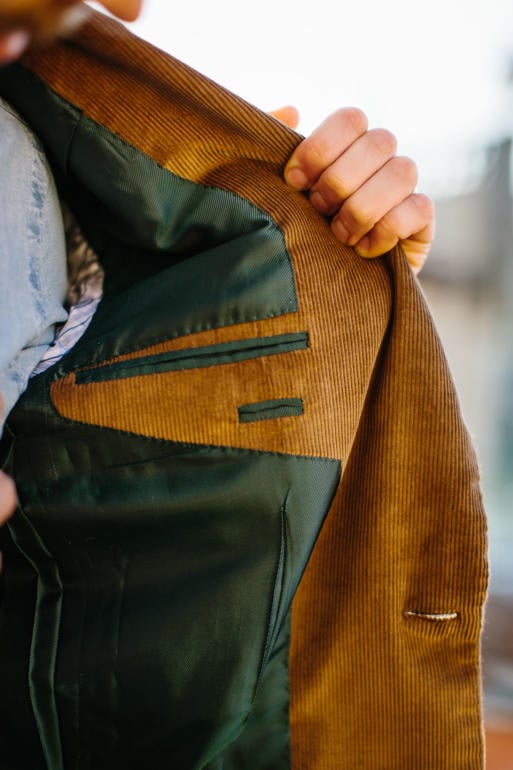 The trousers too had issues, though they were in the common Neapolitan vein of getting the hard things right, but missing the easy ones.

The waist was a couple of inches too big and had to be corrected locally. The fork was also marginally too tight (though this has softened down with wear).

We had two fittings in London, and perhaps with a third fitting (common for a first order) these things would have been corrected. 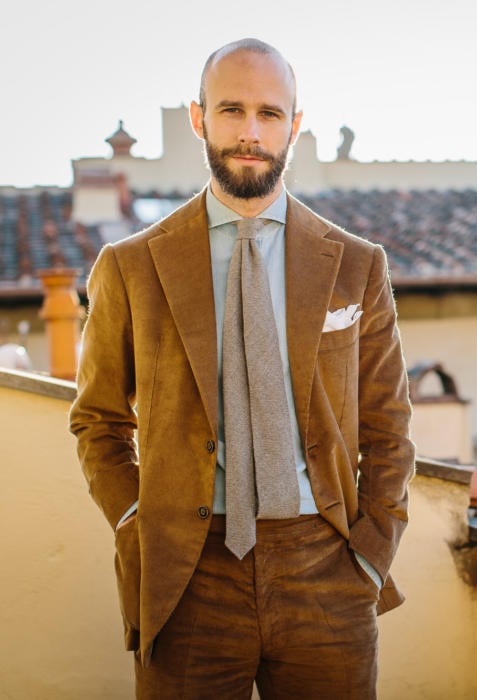 The sleevehead was also more pronounced than I had anticipated.

Despite being a spalla camicia construction, and very soft in the shoulder padding itself, there was a good deal of roping at the top of the sleevehead.

This creates a stronger impression around the shoulder and, for me, makes the jacket too formal to work with casual trousers such as jeans or chinos.

Again, this was largely a result of the two fittings, at neither of which were the shoulders finished to the point that the style could clearly be discerned. My fault perhaps to not question it further.

Again, this can and will be corrected.

Elsewhere the fit was very good - in the back, in the sleeve, in the line of the leg.

There is (again) the common issue with Italian tailors that they cannot source the matte-horn buttons English tailors use, and which I generally prefer.

But those too can be changed, and I may even grow to like these sportier versions.

The waistband of the trousers is extended and broadened (to 5cm, the same as the turn-up) in the same style as my other Cerrato trousers. 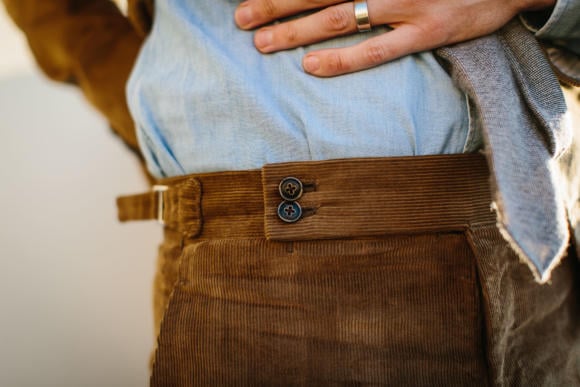 I wanted a corduroy suit because I love the idea of a casual, knockabout suit, and because I planned to wear jacket, trousers and suit separately (the 'three-way' suit, as I described it).

In this outfit I enjoyed wearing very casual pieces with the casual suit: a pale-blue denim shirt and a grey cashmere tie - the Viola Milano collaboration with Alexander Kraft I reviewed here.

On the feet, my reliable Gaziano & Girling bespoke adelaides. (Another illustration of the perils of photography - look how big that toe looks!) 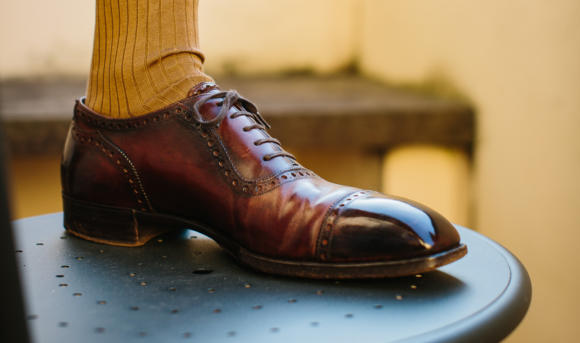 Since receiving the suit, I've been told that Marinella in London are no longer going to work with Pirozzi, which is a shame as it makes this suit rather less relevant to UK readers.

But given the style of shorter jacket, broader lapels, slim waist and narrow trouser, Pirozzi is a genuinely different and more contemporary option for anyone visiting Naples.

You can follow the discussion on Corduroy suit from Sartoria Pirozzi, Naples by entering your email address in the box below. You will then receive an email every time a new comment is added. These will also contain a link to a page where you can stop the alerts, and remove all of your related data from the site.

Hi Einar, I think a white linen can still look fine in this context, and the white lines won't make much difference. Personally I wouldn't wear it with jeans, or even chinos, but smarter outfits are good. With something more casual like that, if I…

We just can't keep on adding products without taking some away unfortunately. We don't want to have things just there for a season, but there comes a point where (as a small company) you can't afford a huge inventory. I decided to introduce the Dartmoor…

Saw this book on sell at Kinokuniya's Sydney store, now that I have seen a preview here I am tempted to purchase it and put it along side your Sartorial Travel Guide, Thanks.

Oh, maybe. That's not how I read it, as he talks about covering. But maybe I was wrong.