The key functional aspect of trouser cloth is the body that enables it to drape well and hold its shape.

It should throw a nice, clean line down the leg, hold its crease, and recover from wrinkling when hung at the end of the day.

Unfortunately, this is much easier with heavy materials. In summer there is therefore a consistent trade off between coolness and performance.

In this latest instalment in our Guide to Cloth series, we will run through the different options – the fibres, yarns, weaves and finishes – to make you aware of exactly what these trade-offs are.

It is then up to you which trouser cloth you pick – one which, as we will see, is largely a question of style. 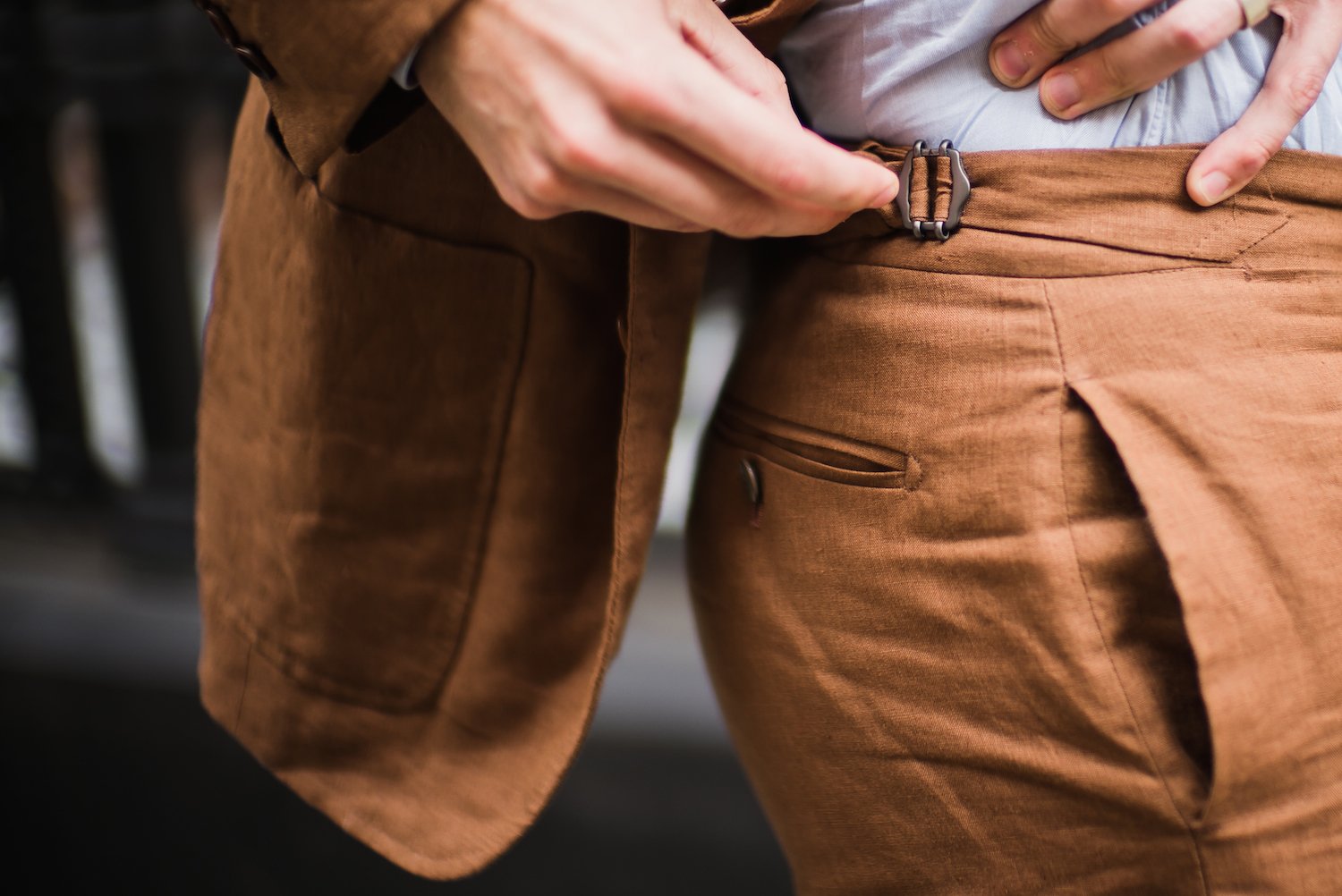 Linen is often seen as the king of summer cloths. It certainly has functional appeal: it is cool to the touch and breathes well.

The biggest downside is style: some dislike how much it wrinkles, and for many others this feature just makes it too informal for the office or other formal environments.

The effect can be mitigated by heavier weights (as is the case with all these trade offs).

Irish linens, coming in around 11 or 12 ounces, hold their shape much better than 8 or 9 ounce Italian versions, and are still very cool. I tend to wear and prefer them. 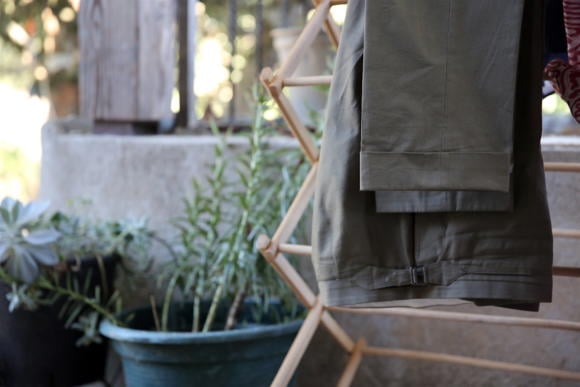 Cotton generally performs slightly better than linen in terms of wrinkling, and can be woven quite tightly, which helps more.

Cotton gabardine, for example, is a tightly woven twill – a twill having more cloth in it per inch, and therefore having more body, and gabardine being a particularly tight twill weave.

Cotton can also come in two-way mixes (a little wool or cashmere) and a variety of finishes. Linen, by contrast, tends to be a simple plain weave and have a simple finish. Herringbone linens have a tiny bit more body.

The problem with cotton is that it lacks the elegance of both linen and wool.

Oliver Spencer, trouser cutter round the corner at Anderson & Sheppard’s bespoke shop, agrees: “Cottons not only crease but the colours tend to be brighter and more garish than the same in linen.”

I tend to wear cotton more as a casual trouser. It definitely has a coolness than can be attractive, but the style is a very casual, almost workwear one.

For some this might be an attraction; for others, the opposite of what they’re looking for.

Which brings us to arguably the best of all fibres, wool.

Wool has the obvious advantage of recovering well after wear. Hang up a pair after a day, and it will have lost most of its creasing by morning.

Wool also responds well to moisture, and therefore can have its creases fairly easily steamed out of it, unlike cotton and linen.

That performance can be enhanced by twisting the yarn, to make a high-twist wool. This increases both its elasticity and its crease resistance.

The only disadvantage to high-twist wools is that they tend to feel crispy, rather than smooth like a normal worsted – or, noticeably in summer, like linen. 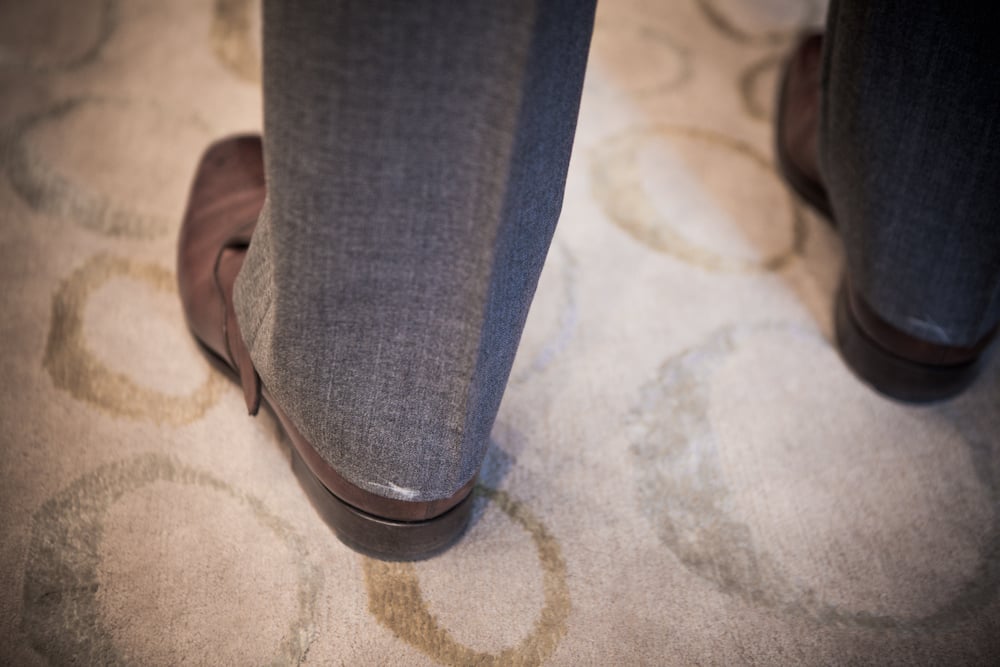 Interestingly, the best known of summer wools is fresco, yet it is not necessarily high twist.

Rather, fresco has been defined by using relatively coarse wool, traditionally a particular weave, and a lack of finish that gives it a raw feeling.

That raw, dry feel was historically associated with a cloth feeling cool and fresh – which in a way I can see. Softer things will often feel warmer against the skin.

But today it’s hard to make an argument for fresco, given its roughness and the need for many customers to line trousers made from it as a result – negating the supposedly cool feeling.

A finer, more finished high-twist wool is likely to be better. “It doesn’t have to be superfine – Super 100s is fine,” says Anthony Rowland at Henry Poole. “If it’s not too lightweight, that kind of cool wool can be perfect for a smart summer trouser.”

Some wools will also be open in their weave than others, but this doesn’t make much difference.

Unlike a jacketing, an open weave can’t be taken too far in a trouser without it quickly losing its shape. (And there’s normally less tolerance for transparency.) 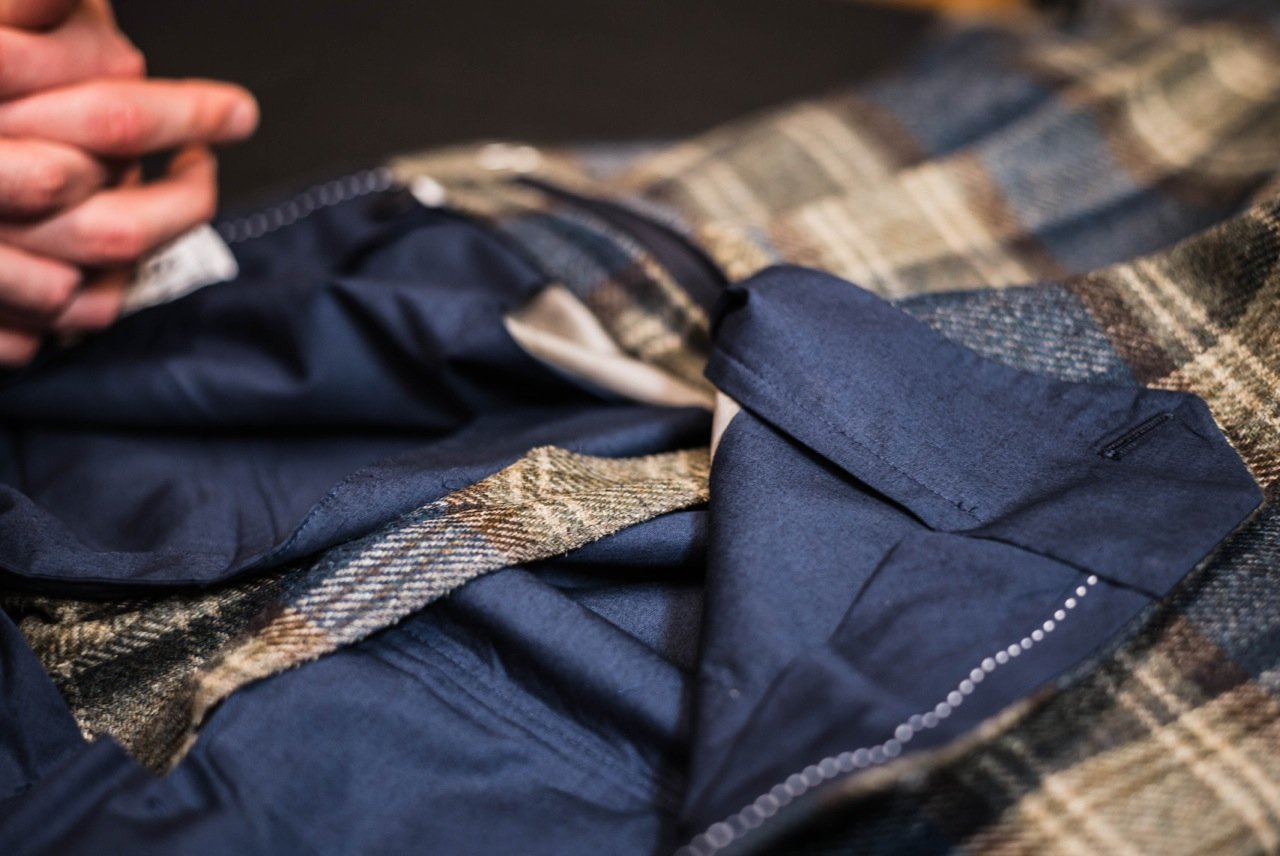 A last word should be said about fibre mixes – usually a mix of three out of wool, linen, cotton and silk.

Cotton/linen can be nice in more casual trousers, such as chinos and shorts.

But it’s rarely a good idea in formal trousers – better to mix one or both with wool, in order to get its recovery and crease-resistance.

Silk can have a similar beneficial effect, but usually it’s added for a particular look and feel, so carefully consider the style of anything with a high silk content. 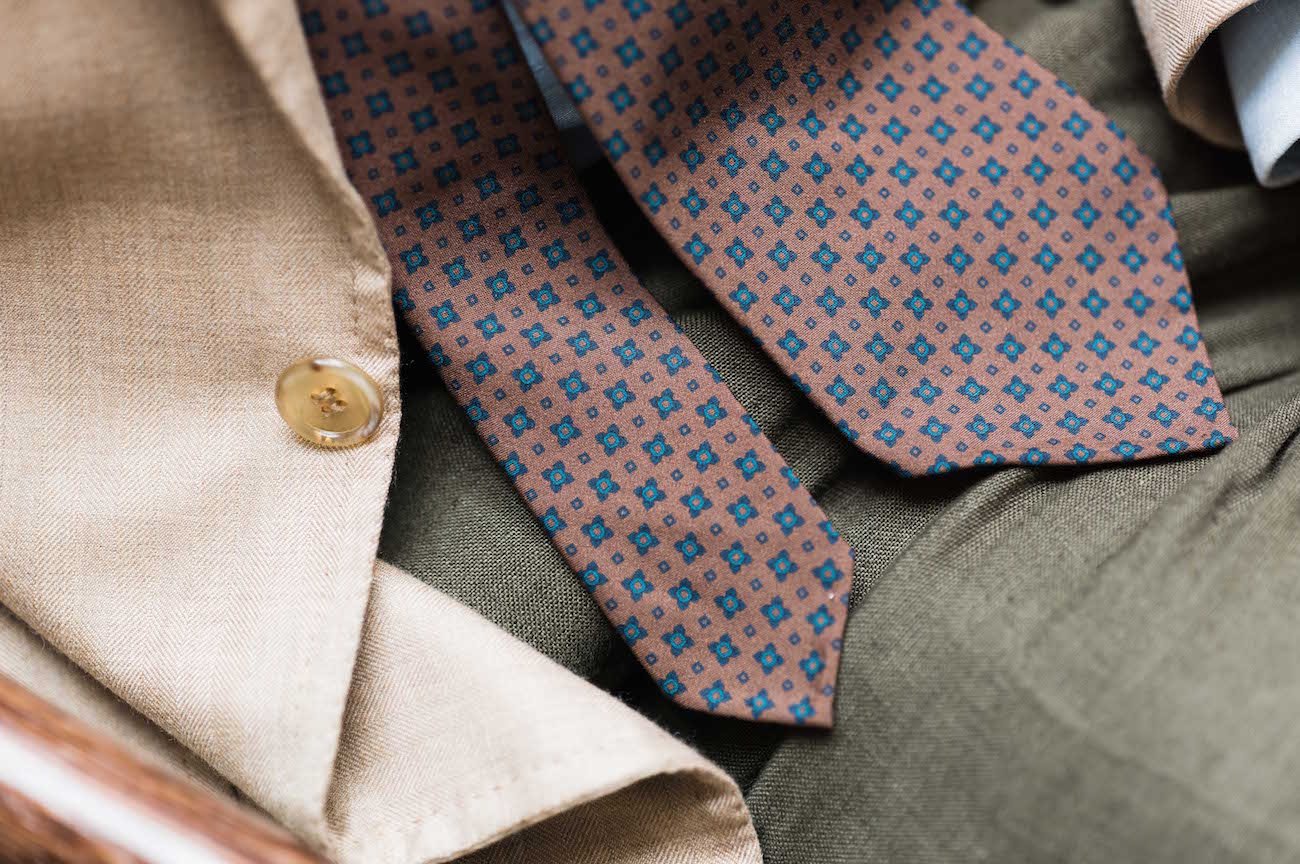 Style, then, is a big driver of what cloth to go for in a summer trouser.

Linen is wonderful – truly one of God’s gifts – and I understand why some people are as fanatical about it as they are about flannel in the winter. But its style will simply make it a non-option for lots of people.

Cotton has its appeal, but it is a style one and a narrower one than linen.

Lightweight wool is likely to be the safest option, particularly with smarter outfits for the office, or with a sharply tailored jacket.

But consider whether you really like the crispiness of high-twist wool before you go with it.

As with all these guides, I won’t recommend specific cloths or bunches.

This is both because I haven’t tried them all, and because the differences between the various mills are much smaller than the variation described above – primarily in fibre, but also in yarn, weave and finish. 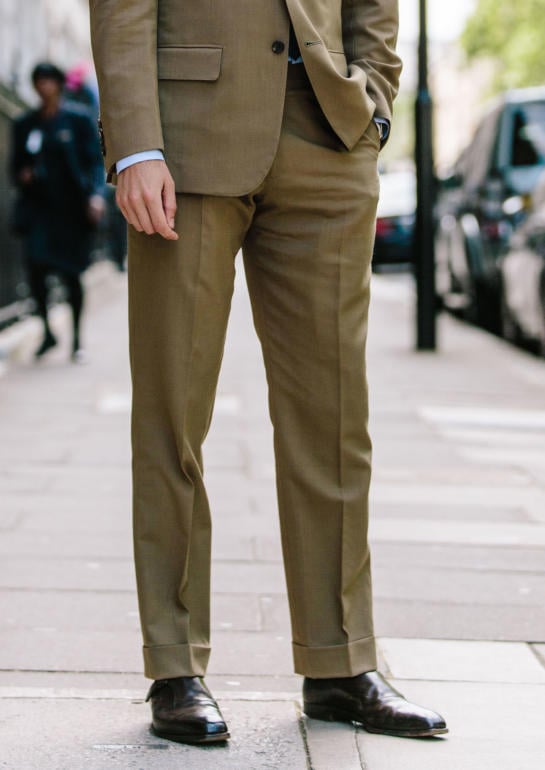 You can follow the discussion on The guide to summer trouser cloths by entering your email address in the box below. You will then receive an email every time a new comment is added. These will also contain a link to a page where you can stop the alerts, and remove all of your related data from the site. 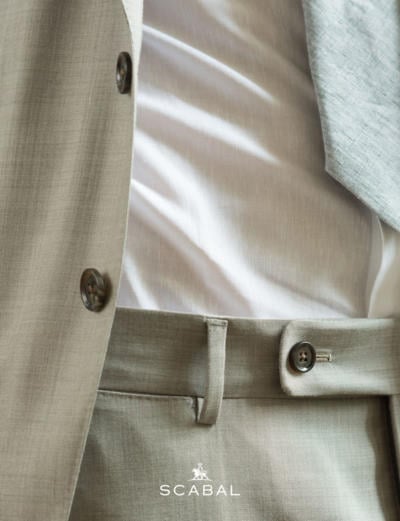 Bespoke trouser cloths
When it comes to the whole silhouette, comfort and style credentials, it’s really the suit trousers doing all the legwork. Scabal’s Cashmere Cotton collection is strides ahead: light, practical and finessed, it blends ultra-soft cotton and heavy Gabardine for a modern, luxurious and durable finish whether for suits or something more casual. Click here for more details