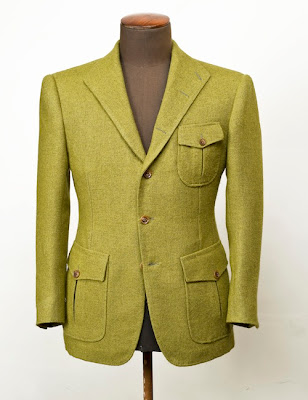 No visit to Paris would be complete without dropping in on Lorenzo Cifonelli and seeing what weird and wonderful things his mind has inflicted on tailoring recently.
First up was the yak jacket. I wrote about this back in February on The Rake, but I hadn’t seen it in person until now. Up close, you realise how ideal yak wool is for tailoring. Substantial and yet soft, it has a slight sponginess that recalls jersey cotton, but is more like cashmere in feel and has more substance than both.
It is woven to order in Tibet, on old single-width looms. Such has been its popularity that Lorenzo now has a book with dozens of available colourways. I’m not sure the grass green is quite me, but a darker green or tobacco brown would be beautiful.
The cut too is typical Lorenzo, the unnotched collar a subtle change that suits a countrified piece. The final, angled buttonhole is a nice touch and the sheer number of them shows off the Milanese finish that Cifonelli does so well. 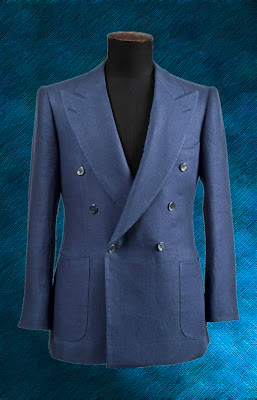 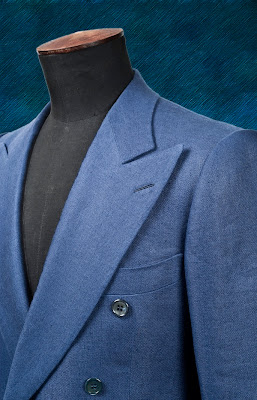 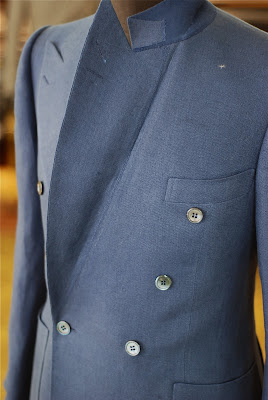 The other two pieces are more recent. First, a double-breasted jacket in a blue silk mix that uses separately cut pieces for the lapels in order to get an exaggerated curve. Being separate pieces, they can be cut on the bias of the cloth and so be worked into a broader sweep up the chest. That, combined with the bottom buttoning point, produces a larger opening to show off shirt and tie, and a rakish overall appearance. 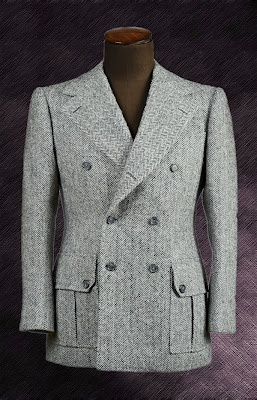 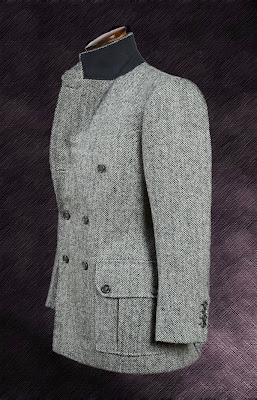 Last, a tweed double-breasted coat with broad, square lapels. The size of those lapels produces a high, sheltering collar when they are raised – accentuated by backing the collar itself in a thick suede that helps it ‘snap’. I also like the bellow pockets with a separate strip of cloth covering the pleat, and angled buttonholes on the flaps.
These jackets won’t be for everyone. I personally wouldn’t wear any of them exactly as they are shown here. But each design provides some form of inspiration, and Lorenzo continues to be one of the few original minds in bespoke.
Readers can see examples of jackets I have had made at Cifonelli by using the search tool in the top left of the screen.

You can follow the discussion on New Cifonelli jackets by entering your email address in the box below. You will then receive an email every time a new comment is added. These will also contain a link to a page where you can stop the alerts, and remove all of your related data from the site.

Not at all Joseph. Do let me know if any gaps ever occur to you

JJ I tend to agree with you. I just wanted to hear your reasoning. And I agree. However 20 years ago 8oz Lesser tropicals and 9oz JJMinnis Rangoon did drape like a brick. Lesser Tropicals was my favorite cloth. ( was )

Dark navy - not something that looks the same as black, which midnight blue should. Hopsacks don't vary much between makers. Just look for a colour and weight you like