Choosing a suit cloth is, in some ways, harder than any other area of clothing. Because they all look so similar.

If we leave aside the more aesthetic – and subjective areas – of colour and pattern, we are left with dozens of similar-looking suitings differentiated only by technical points of composition and construction.

Some of these points, however, are pretty important; others less so. In this post we will attempt to explain the difference, and therefore highlight which ones you should care about. 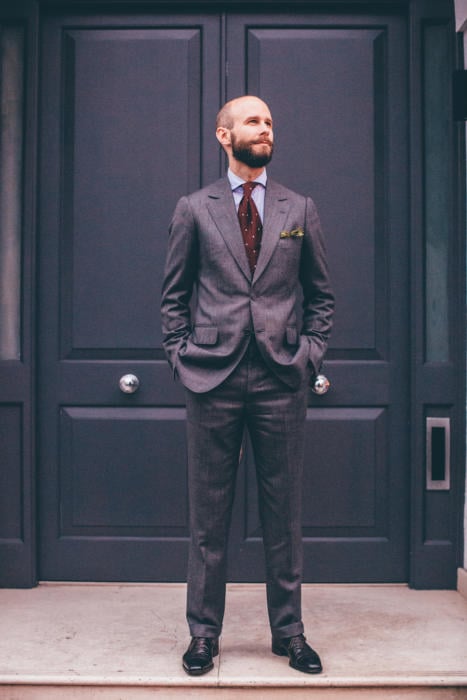 Let’s kick off with some definitions. Most suits are made from worsted wool. (We’ll cover flannels and woollen suitings in a separate post.) ‘Worsted’ refers to the yarn the cloth is woven from – longer fibres are used, and spun into a finer yarn.

This finer, sleeker, and more uniform yarn usually produces finer, sleeker cloth – which is why suits look so much sleeker than other woollen products.

But it can also be woven into fairly thick, heavy cloth, and finished to look woollier and fuzzier. It depends on what look and feel the weaver is going for.

One of the central aspects of suiting is the fineness of this wool fibre. It is measured in microns, and is often referred to by a ‘super’ numbers, eg Super 120s or Super 150s.

This is an important area, but also a potentially misleading one. We will deal with it in more detail in a separate post (on ‘superfines’).

Below: A fitting at Chittleborough & Morgan in a particularly thick and heavy worsted suit 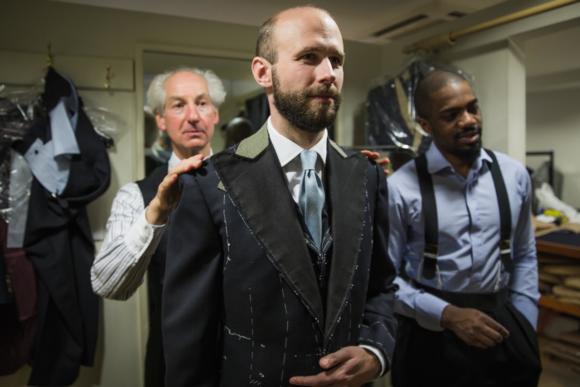 A second key attribute of worsted cloth is its weight. This will be clearly marked and is measured in either ounces or grams.

Generally, a heavier cloth hangs better and lasts longer, but lightweight cloths are often seen as more luxurious and cooler in warmer climates.

Whether they are more luxurious is of course subjective, and changes over time. Coolness is more objective, and it’s fair to say that men can generally wear heavier cloths than they think.

Weight is driven by two things: the thickness of the yarn and the ‘construction’ of the cloth it is woven into.

Construction itself is a broad term and includes: 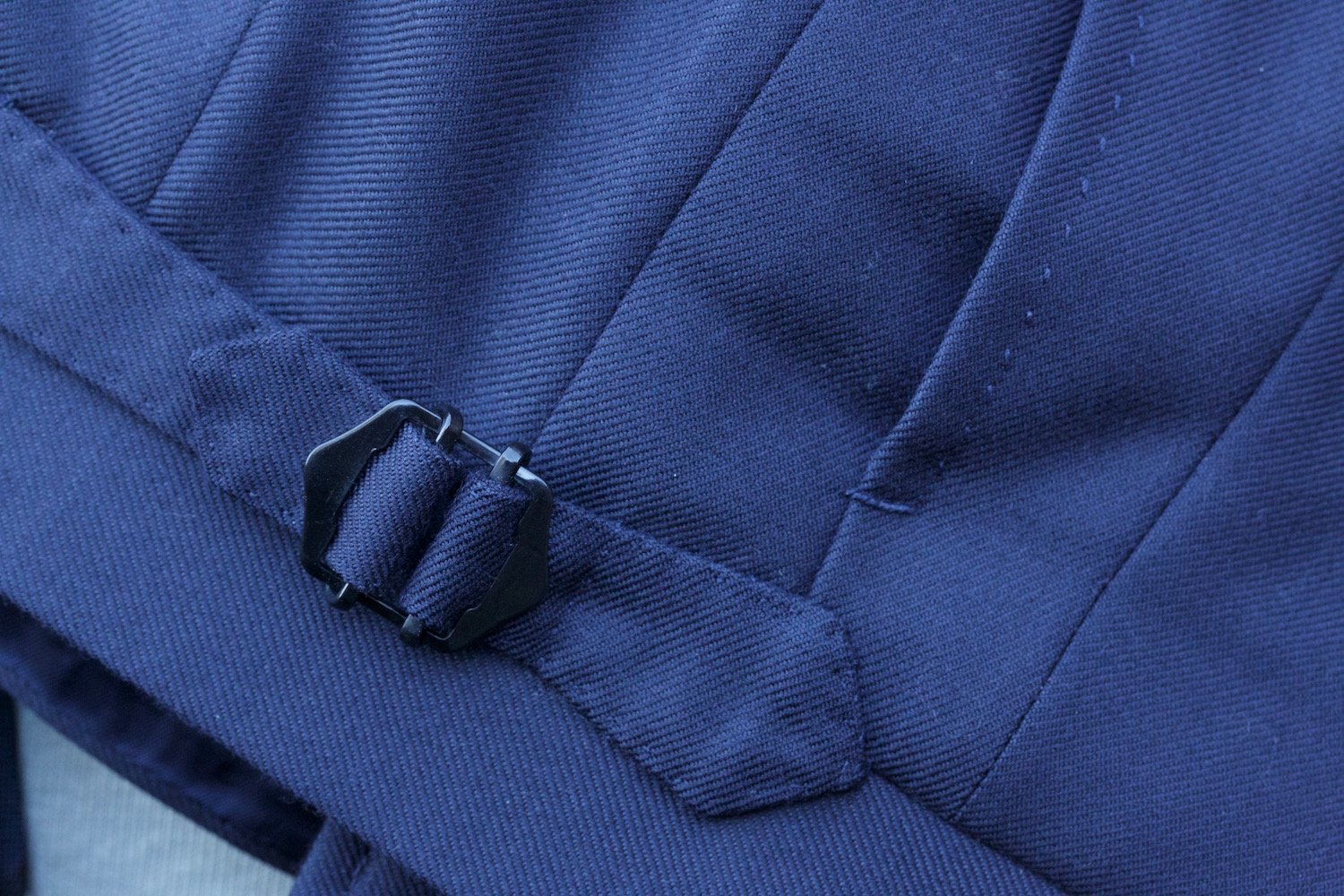 Above: the twill of my Whitcomb & Shaftesbury navy suit

So for example, a twill will always be heavier than a plain weave in the same yarn, just because a twill is denser and therefore heavier.

The construction can also be important in how well the cloth hangs and retains its shape. A denser weave, like a twill, usually performs better in this respect, and is therefore a good option for suits or trousers. Sports-jacket materials tend to be softer and looser.

Most weaves are more about the pattern of the cloth than its weight and feel. But those can make a functional difference include gabardine (a twill denser in the warp), barathea (a dense, complicated weave) and satin (which creates the shiny look we associate with the term).

There will be another, later post in this series illustrating these weaves – largely in order to understand the aesthetic differences between them.

Below: A herringbone weave on my Caraceni jacket (a woollen though, rather than a worsted)

Another construction area that can cause confusion is phrases such as ‘2-and-2’ or ‘2-by-2’.

Generally a 2-and-2 weave means that the cloth is woven evenly, face and back, with two threads moving up and down on both sides.

The alternative is a 2-and-1 twill, with two threads on the face for every one on the back.

The weave is even in this case, but the variation is in the yarn itself. This construction is lightweight, but can also be rather fragile.

The vast majority of cloths are 2-and-2, although you do get heavier and more traditional cloths in a 3-and-3. Either way, this is towards the more technical and end of cloth attributes. 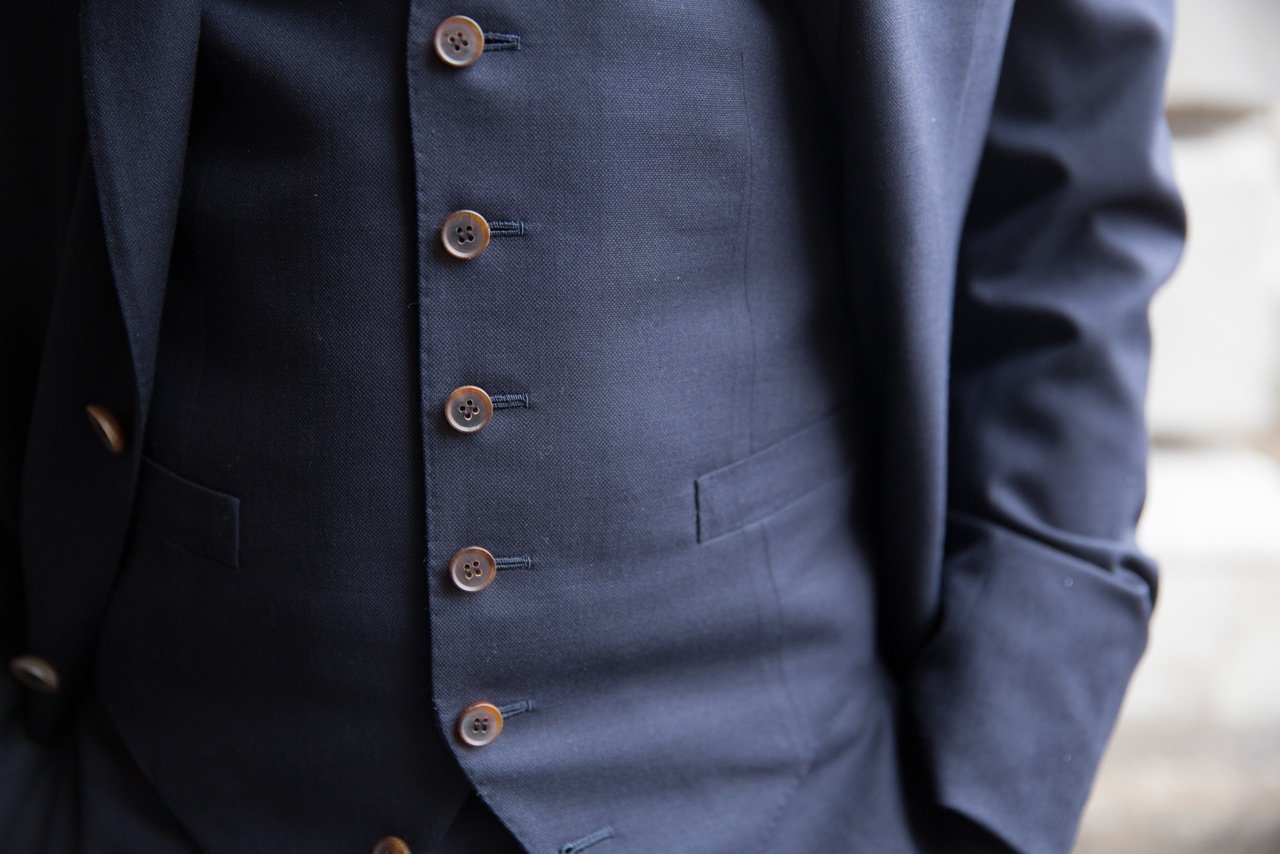 Below: A merino-wool waistcoat from my Cifonelli navy suit

More important is any variation in the fibre that goes into the yarn.

Some worsteds, for example, include a small amount of cashmere in them, in order to feel softer (often trying to replicate the feel of superfines).

There may be, say, 10% cashmere fibre spun in with 90% wool. At these proportions, the cloth is a little softer but still hangs and performs well. If the amount of cashmere were to be increased, however, it would start to make the cloth spongier and baggy – which is why 100% cashmere is rarely used for suits or trousers.

Most other worsted yarns are made with merino wool, though even here there are variations. Escorial, for example, is a merino that comes from a single flock in Tasmania and is particularly fine and springy.

(Other suiting fibres such as mohair, also often mixed with wool, will be dealt with in a separate post.) 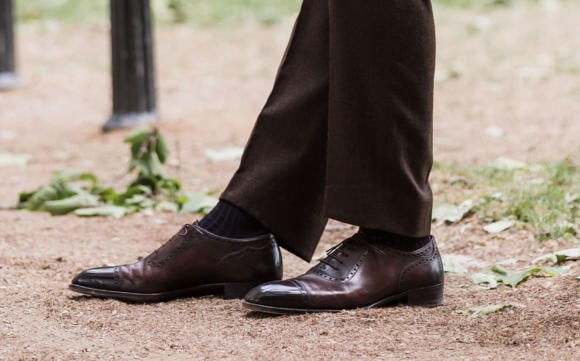 Above: A brown worsted flannel trouser from PA Crowe.

The finishing of cloth – brushing, milling and so on – can vary a lot with woollens and other cloths. But it is fairly consistent with worsteds: they all tend to have a very clean, close finish to give them their sleek, smart appearance.

The exception is worsted flannels, which are milled to try and replicate the feeling of flannel, just in a lighter weight. And there are ‘crushed’ or semi-milled worsteds, though these are relatively rare. 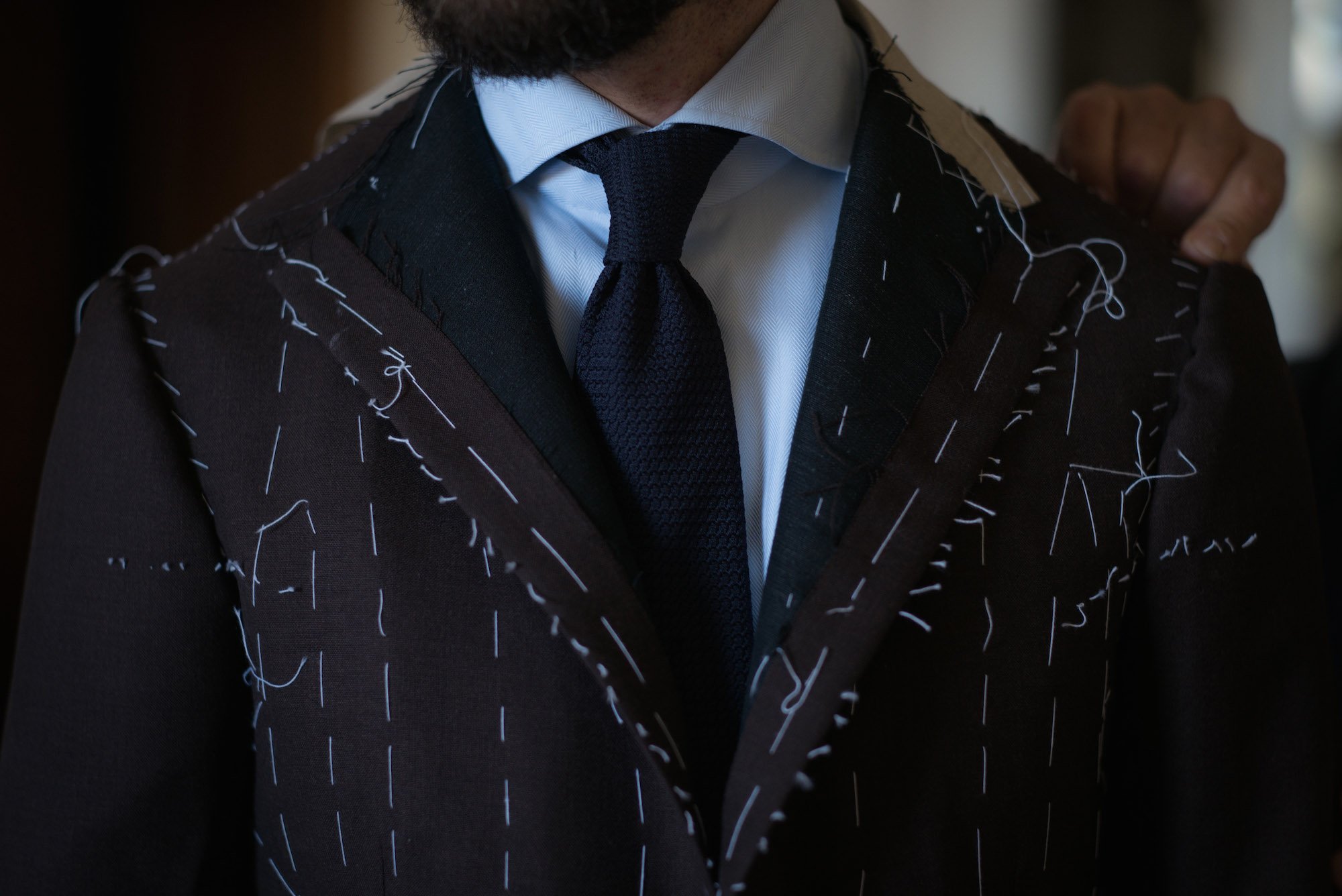 Above: Fitting for high-twist brown suit with Dalcuore

Overall, colour and pattern are always going to be the most important things in the selection of a suiting.

But it’s worth understanding fineness and its effects, composition of different fibres, and the various things that go into determining weight.

You can follow the discussion on The guide to worsted suitings by entering your email address in the box below. You will then receive an email every time a new comment is added. These will also contain a link to a page where you can stop the alerts, and remove all of your related data from the site.

Anything lightweight really. Perhaps in navy or tan

An inch above the ankle? As in, the ankle bone? Yes, I think that would be too far and you would likely regret it in time. Have them shortened so they only just touch the top of the shoe. They'll be shorter than that when…

The rules and how to break them 1: Trouser length

Well, it's hard to give precise advice as I don't know your style or lifestyle, but perhaps linen? That seems to be an obvious gap

I can certainly see your point, Chris. I think that would work less well just because there were so much more of the black, and that would mean the two dominant colours were black and white, which would be very high contrast and not as… 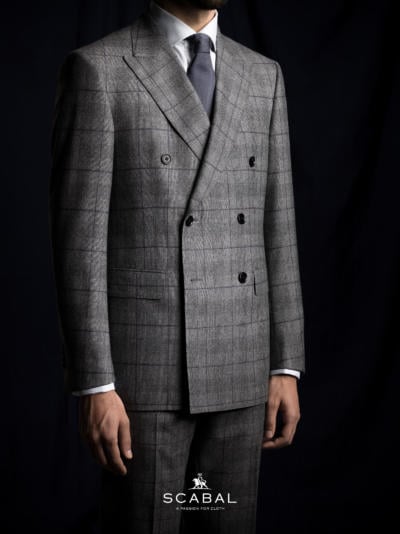 Cortina Super 120s
Just like the Italian ski-town that inspired its name, Scabal's CORTINA suitings collection continues to astonish and delight our customers during the colder months. Crafted in Super 120's pure wool and carrying weights around 290g, it is the perfect cloth to warm you up as the temperature drops. Designs available include bold glen checks and overchecks, as well as attention-grabbing Saxony-style motifs and pinheads. Each of these courageous cloths are depicted in a variety of browns, greys and blacks, with a mixture of milled and clean-cut finishes for a traditional alpine look. Click here for more details