This is the latest in our Guide to Cloth series – setting out the basics for what makes a good trouser, and the material options. The Guide has more in-depth articles on summer trousers, flannel, and other cloth basics. Available in the menu under ‘Guides’ and here.

What makes a good trouser? Why do some cloths work well, and others not?

And from a style point of view, which of the different ‘types’ are more and less formal?

When readers start to move from suits towards separate jackets and trousers, these quickly become questions that bother them. Particularly if they’ve paid hundreds of pounds to have trousers made, and they’re not quite right.

The key attribute of trousers is that they hang well.

Trousers are not shaped around the shoulders or the chest. They’re largely just cut for the hips or waist, and left to hang.

So they need to drape cleanly and consistently, throwing a nice sharp line and retaining it when bent and stretched, as the user walks, stretches and sits.

Technicians sometimes divide this into three attributes: crease resistance, shape resistance (not bagging at the knees, despite pressure), and some natural stretch (which allows the cloth to return to its shape after that pressure).

This usually comes from a cloth that is denser, with more of the yarn woven tightly into every inch. This is the advantage of weaves such as twill, for example, which are naturally denser.

Cloths created for womenswear often noticeably lack this. They’re loosely woven, to flow and sometimes shape around the body, but lose their shape under pressure.

There are exceptions. For example, if the yarn is particularly strong, the weave doesn’t have to be so dense. This is the case with linens and with high-twist wools. The strength of the yarn means they can use a looser, plain weave, which still retains drape with the bonus of allowing air to pass through.

And fabrics can be too dense. If there’s too much fibre in there, they can feel stiff and ‘dead’. Technicians talk about holding the cloth in the hand, squeezing and releasing it to see how it reacts – how much ‘life’ there is.

But density is still a good rule of thumb. That’s why you often find bunches of high-twist wools divided into ones for trousers and suits, and others for jackets.

Those made specifically for sports jackets are usually softer, looser and have a more open weave. You can hold it between two hands, move each up and down, and feel the movement the cloth has. It would not make good trousers.

Trousers are worn a lot more heavily than jackets.

A final point is pilling. Cloths that are looser and not suited to trousers are more likely to pill.

A little trick to test this is to take the cloth between your finger and thumb, gently rub it in circles 10 times, and see if a little fluff comes off, in a messy way.

This is a good indicator that the material will pill later, particularly where there is most abrasion, for example between the legs.

So, with all this in mind, here are the key types of trousers.

The most noticeable absence is hard-finished worsted wool (standard suit cloth). This might hang well, but style wise is usually too shiny and hard-finished to look like a separate trouser.

A particularly dense wool twill. (In general, you can tell the density by how vertical the diagonal twill line is.)

Great body and shape, the only downside being a tendency to look a little old fashioned, and therefore often better in darker, formal colours. Feels thick, with body, rather than thinner and harder like gabardine.

A version of whipcord more commonly used for coats, but also good for trousers. Partly defined by country colours – brown, tan, green – and different yarn colours (often visible between the twill lines). Has a tendency to be shiny; matte versions often better, more casual and versatile.

Whipcord with twill lines running in pairs. Often a little more matte in texture as well.

French for twill, and a phrase not often used because it became rather broad. Generally, refers to a wool twill that has a slightly woolier finish without being milled.

A hard-wearing cloth with the appearance of the same vertical ridges as corduroy. It’s woven differently, however, and looks different for the spaces between the ridges and faint lines running between them. A good, denser alternative to corduroy.

Cloth that uses a yarn that is twisted to give it strength and crease resistance. Usually the default for formal trousers in warm weather. The summer equivalent of flannel, though a little smarter.

The universal favourite for separate trousers, because it nestles so nicely between formal and casual. Fine with a sweater, a tweed jacket or a navy blazer. Defined by its milled finish, which explodes the fibres and causes a fluffy appearance.

A warp-faced fabric with a high density. Traditionally in lots of yarns and finishes, but today generally in a fine yarn and hard finish, which makes it sleeker and shinier, similar to suitings. It is usually too formal for me as a result. Most plain cottons used for tailoring are gabardines, however.

The distinctive weave (actually a type of velvet) with vertical ridges. Nearly always cotton, but also wool. In a good weight, with no cotton or elastane, makes good trousers. But perhaps more subject to the vagaries of fashion than the wool twills.

A cotton twill with a brushed finish. Warmer and cosier, and therefore mostly used for winter. Again, subject to fashions: often seems a little old-fashioned today.

Not a cloth at all, but a style of cotton trouser. Usually uses a cotton twill, but otherwise varies hugely as to how the cotton is woven. Can be stiff and sharp, even shiny; or can be soft and washed. In the latter case (most common in high-street shops), largely gives up the ideals of drape and body.

A cotton best defined by its 3-by-1 twill and indigo colour. But can be in a huge variety of weights and colours, even weave structures. Denims used for tailoring are generally finer and denser, in order to achieve a bit of that drape. Which is why they look nothing like jeans.

As ever with describing cloths, there are the original, narrow definitions and then there are modern uses.

Often the definition describes only one part of the process (such as weave or finish) but it takes on other aspects over time (eg is a worsted flannel really a flannel?). And then there are cultural associations (such as with serge).

I find the key thing to remember is – when you visit a tailor – to know the kind of cloth you want (heavy/light, dense/loose, casual/smart) as well as the name. There will always be variations and exceptions.

You can follow the discussion on The Guide to Trouser Cloths by entering your email address in the box below. You will then receive an email every time a new comment is added. These will also contain a link to a page where you can stop the alerts, and remove all of your related data from the site. 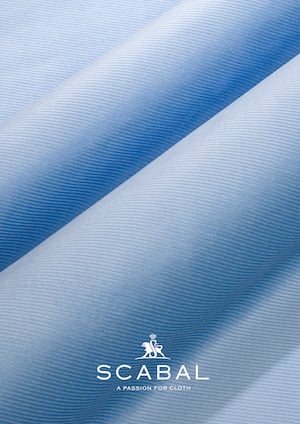 Scabal Cashmere Corduroy and Cashmere Cotton
Autumn is the season where comfort and warmth are essential elements of every gentleman’s wardrobe, the challenge comes in remaining sartorially refined at the same time. To assist in this pursuit, Scabal have released a new selection of Cashmere Corduroy and Cotton fabrics. Whether you are looking for relaxed trousers, smart blazers or a sporty suit this collection fits the brief. Split into three areas, the collection initially presents a select choice of luxury cottons in a heavier weight that makes it an ideal choice for the cooler months. Move into the Corduroy and you can choose from the fine 12 wale which is smarter or the more casual 7 wale with its larger ridges. All fabrics are enhanced by the addition of cashmere which gives a luxurious finish and the softest hand feel enveloping the wearer and providing some respite against the elements. Colours are classic plains which are easily combined with others, making this collection adaptable for business of relaxed casual wear. Click here for more details